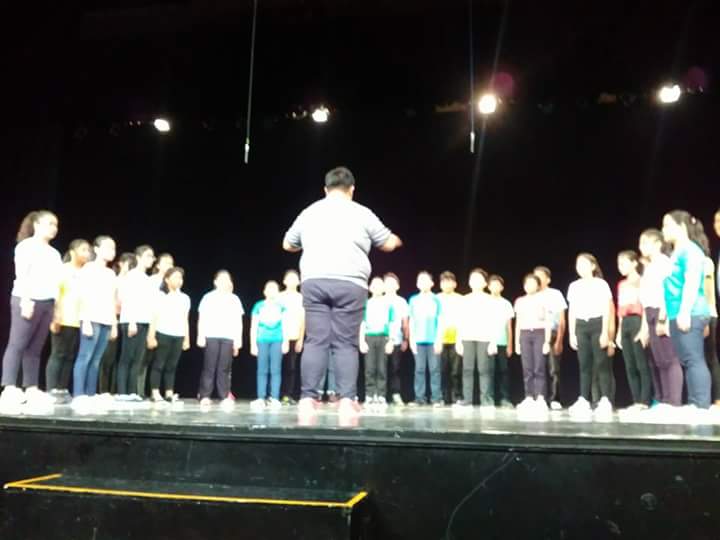 Mr. Kennedy Tabon (back to the camera) conducts CADENCE at the Aliw Theatre stage for a berth at the MBC Chorale Competition.

The Casa del Niño Chorale Ensemble (CADENCE) auditioned last October 22 for a berth at the MBC Chorale Competition at the Aliw Theatre in Pasay City along with other choirs from different communities all over the Philippines. Out of more than a hundred groups, Cadence passed and got included among the 16 children’s choirs who will perform for a slot in the Semi-Finals on December 6 to 10, 2016.
The Manila Broadcasting Company (MBC), which sponsors and organizes this annual contest, is the largest radio network in Asia. The contest begun in 2007 to search for the best choirs in the Philippines and it is now considered to be the biggest all-inclusive chorale competition in the land. There are two categories in the contest: the Children’s Choir category and an open category for schools, churches, communities, companies, government agencies and special interest groups that are interested to participate in this prestigious event.
The grand prize winner in the children’s choir category will receive P100, 000.00, while the champion in the open category will take home P150,000.00.
CADENCE has 33 members from the Science High School Department who were trained and will be conducted by their choir master, Mr. Kennedy Tabon on December 6 at the Aliw Theatre during the Semi-Finals. If qualified, they will move on to the finals on December 10 at the same venue.